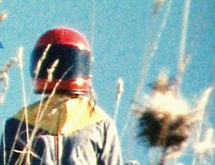 In the spaces of Cango, XING presents Flora, a project that grew out of an experience with Netmage festival and created for the Osservatorio per le arti contemporanee dell’Ente Cassa di Risparmio di Firenze.

The programme opens with Bissera, a multi-screen work created by the multimedia artists of Invernomuto and the photographer Moira Ricci. It is followed by Circo Togni Home Movies, a collection of rare 8mm films by the Togni family, restored by Home Movies – Archivio Nazionale del Film di Famiglia and La Camera ottica, and remounted on four screens by the film-maker Mirco Santi, Paolo Santi, and Giulio Bursi accompanied by the counterpoint of guitars, electronic objects by Andrea Belfi and Stefano Pilia.

Another recording for the project Hells & Bells by the duo OLYVETTY, composed by visual artist and musician Riccardo Benassi and musician Claudio Rocchetti. A return to more gentle tones is provided by the new cinematic production of All the way alive (Air Trees Water Animal)born from the new collaboration between the multimedia artist Andrea Dojmi and the musician Flushingdevice. Finally there is the tense, almost symphonic For It Happens Alike With Man and Beast, As The Beast Dies, So Man Dies, Too, with images created by the English filmmaker Andrew L. Hooker, ‘orchestrated’ by the electro-acoustic trio from 3/4HadBeenEliminated.