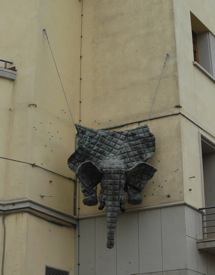 The end of second act

Invited by TusciaElecta to create a permanent work for the municipality of San Casciano, Perino & Vele designed a suspended installation for the walls of the Teatro Niccolini, a ‘second skin’ with an animal-like appearance that interrupts the monumentality of the architectural space by inducing a subtle sense of alienation in the observer.

Added to that is the sense of perceptual uncertainty induced by the indeterminacy of the material: through the renewed use of papier mache, used by the duo from Campania since its inception to shape the singular forms, soft and sinuous, the artists challenge the solidity that is typical of traditional sculpture, calling for a new look. The end of second act brings into play an ‘unusual narrative’, capable of changing the conditions and consistencies of the everyday to create extraordinary relationships and landscapes.