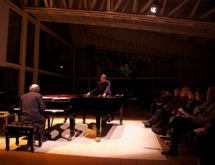 In music as in art, it is often necessary to ‘rewind the tape of time’ and listen again, analyze and reflect on the experiences that have led to the current creative developments.

With the title REWIND music from the future to the past – the 2010 edition of Tempo Reale Festival builds a bridge between the history of music research and the most recent experiences.

The festival programme includes a lecture by Andrea Aleardi on ‘Architecture for the entertainment world’; the vocal ensemble L’Homme Armé with a concert by A-RONNE/from the sixteenth century to Berio and Sanguineti; TR_PLAYLIST with Denis Smalley, the performance by Jonathan Burrows and Matteo Fargion, Cheap Lecture/The cow piece; a concert by the piano duo Cadini&Torquato, John Cage/Winter music; the concert + workshop of the Tyrolean composer and theorist Albert Mayr, Hora Harmonica, and in cooperation with Musicus Concentus the concerto Datamatics [ver.2.0] by Ryoji Ikeda.
A festival with great variety that will stimulate the curiosity and interest of those with a sensibility for musical innovation, but also satisfy the desire for the socially committed music of the older and younger generations of Tuscany.