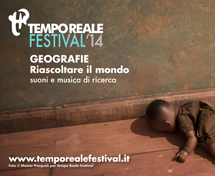 The Tempo Reale festival will open with “Welcome,” a sequence of musical passages and readings on migration themes of the Bible, vocally interpreted by the Tempo Reale Electroacoustic Ensemble and Massimo Altomare (Sept. 26, Limonaia of Villa Strozzi), and come to a close with a performance by Cellule d’Intervention Metamkine, a French group open to musicians and directors who investigate connections between image and sound.

With a large following in France, Canada, the U.S.A, Japan, Australia and New Zealand, Cellule d’Intervention Metamkine specializes in blending sound with visual effects on mirrors and the screen with the use of 16 mm film in order to create a backdrop for their improvisations. Images and combinations as well as extemporaneous sequences, all which express a common theme, bond with a live soundtrack that is also amplified by tape recordings and vintage synthesizers (October 5, Teatro Florida).

A highly charged, two-track evening of experimental and pop music is in store for the audience at the concert showcasing Luigi Ceccarelli and Jacob Tv’s digital electronics.  A native of Holland, Jacob ter Veldhuis is one of the most intriguing and charismatic artists on the contemporary European music scene thanks to his multimedia works exhibited in tandem with electroacoustic compositions by Luigi Ceccarelli.  The result is a musical tour de force that blurs the line between a real or a virtual world (Sept. 30, Limonaia of Villa Strozzi).

Once again, the Tempo Reale Festival program includes the ‘Traveling Alone’ showcase for up-and-coming electronic musicians. Five competition-winning soloists, who promise to open new musical horizons, will headline an evening of Live Electronic Music with the Sounds of the World (Sept. 28, Cascine Park).

Not to be missed is SOUND & BIKE, part of the Florence Summer Festival program, an excursion involving installations along five routes in the Cascine Park, each highlighting the musical heritage of one of Florence’s resident expatriate communities (Sept. 28, Cascine Park).

Sound Landscapes, a theme dear to Tempo Reale, an organization active for years in music research, production and education, will feature two events that aim to expand sound perspectives, with the audience, blindfolded, lying down on comfortable mattresses. One is a full immersion performance by Francisco Lopez with site-specific music by the Spanish artist.  His work is inspired by field recording, utilizing a play of sounds that are either full volume or barely audible.  Currently the director of SONM (Sound Archive of Experimental Music and Sound Art), a center specializing in sound art, Lopez’s groundbreaking achievements have been recognized by Prix Ars Electronica, (October 1, Limonaia of Villa Strozzi).

The sound landscapes of the Italian town of Ravenna are the wellspring for BUCO BIANCO/SIMFONIA PER RAVENNA (Symphony for Ravenna). This landscape concert is the creation of the Fanny & Alexander founder Luigi De Angelis and visual artist Sergio Policicchio (October 3, Limonaia of Villa Strozzi).