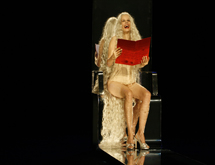 From October the 6th to October the 13th 2009, the Festival Tempo Reale occupied theTeatro della Pergola, the Museo Marino Marini, Cango and Villa Strozzi for a series of concerts and performances, which, along with sound theatre, included courses in musical improvisation and sound design.

The 2009 events included, among others, ESSE Teatro Sonoro da Mallarmé, with Sonia Bergamasco and Francesco Giomi; Ossaturawith Elio Martusciello at the computer, Fabrizio Spera on the drums and objects, Luca Venitucci at the piano, on the accordion, objects and electronics; Scolpire il suono (Sculpting Sound), directed by Emmanuel Favreau, creator of the Group de Recherches Musicales Tools, one of the most widely used software tools by sound designers throughout the world. And again, Osso by Virgilio Sieni and Uri Caine Ensemble & Tempo Reale for the Berio Project.