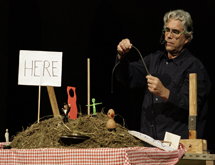 The Table of Earth

In collaboration with Fabbrica Europa, Tempo Reale produces The Table of the Earth, a new original performance by David Moss previewed in Florence:  David Moss has designed an interactive table, a tool for sound theatre that addresses issues of ecology and the man-machine relationship.

The versatility of voice and gesture of the American performer David Moss is once again linked with Tempo Reale’s exploration in the fields of interactivity, microphone and processing techniques and sound spatialization. The project is based on a large work table on which objects are placed, instruments, sensors and microphones through which the musicians involved create an imaginary ‘sound story’, on the border between theatre and sound, a continuous exploration – extemporaneous as well- of unheard, amusing and engaging musical directions. All of these are joined by exciting themes such as the use of the land, acoustic ecology, the memory of the Seventies and so on.