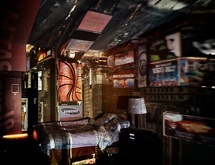 Abelardo Morell was born in Havana in 1948, but was only fourteen when he emigrated with his family to the United States. From an early age he understood that photography could help give free rein to the inner turmoil and alienation he feels, as a stranger in a strange land.

Attentive to the material aspects that the camera lens, by its nature, is good at capturing and magnifying, he is also eager to express the transcendent and metaphysical side of things, with an irreverent and adventurous spirit.

For the series of encounters Incursioni, Morell was a guest of the Studio Marangoni.