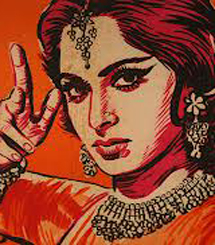 River to River Florence Indian Film Festival is back with its 12th edition.
From the 7th to the 13th Decembre at the Odeon cinema in Florence and from the 14th to the 16 Decembre the Festival reaches Rome at Trevi cinema.
For the centenary of Indian cinema that very first film, Raja Harishchandra by Dadasaheb Phalke, will be screened.
Among the guest stars: Amitabh Bachchan, Anurag Kashyap and Imtiaz Ali.
On the occasion of the centenary of Indian cinema the Festival will screen Raja Harishchandra by Dadasaheb Phalke, a black and white and mute film, that was screened for the first time on the 21st of April 1913 at the Olympia Theatre of Bombay.
The Festival will present a restored version of the film, in collaboration with the National Film Archive of India.

To celebrate this very special birthday, River to River Florence Indian Film Festival has a big surprise in store: in partnership with Luisa Via Roma, it will pay a special tribute to a Bollywood superstar that is loved all over the world by millions of fans, hailed everywhere on earth and worshipped like a true god: actor Amitabh Bachchan – as an official guest, for the first time at a festival in Italy – who will be in Florence to present some of his films.