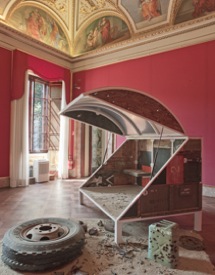 Pitti Immagine Discovery was officially formed on 9 April 1999. The intention of Pitti Immagine was to create, in Florence, a place in which to concentrate attention on the most stimulating research going on in contemporary expressive languages. This was the beginning of a unique experience, under the direction of Francesco Bonami: not a gallery, not a museum, not a collection, but a laboratory in which to experiment with the capacity of a company to make a contribution to a city and its cultural life in a clear, precise way.

The Foundation has the objective of independently promoting exhibitions and publishing initiatives involving the interaction of fashion, the visual arts, cinema, photography, advertising, architecture and music. In other words, the task is to shed light on the most innovative artistic phenomena, from which fashion can draw material for design, and for which fashion itself is, to an increasing extent, material for reflection, motivation, production.

Since 2008 The Pitti Discovery Foundation collaborate with the Osservatorio per le arti contemporanee.