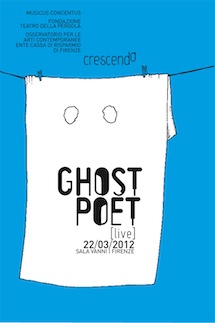 Ghostpoet, stage name of Obaro Ojimiwe, at twenty-nine is one of the most important novelty of black music today. The singer, rapper, musician and poet in London is an expert on hip hop beats and rhyming, and fits of law, with authority and intelligence, in the footsteps of the great masters of black music, like Gil Scott Heron, Mike Ladd, Saul Williams.
The music scene that surrounds his lyrics is made of echoes dubstep and garage, groove and electronic landscapes, in a formula that combines the best size of the concert and the reading of poetry. Ghostpoet on stage by her best, as happened last Sonar festival in Barcelona, ??in a performance that has made headlines.
Ghostpoet is an antihero metropolitan, and his sensational debut disc “Peanut Butter Blues & Melancholy Jam”, released by Gilles Peterson‘s label Brownswood, tells of street life and daily struggle, with lyrics sung and recited with original energy and vehemence.
Born and raised in London, Coventry, Nigeria and the Caribbean Ghostpoet has treasured for so many experiences and chose music as a boy, who was captured by many plays since childhood until late at night. “I did not think poetry – said in an interview Ghostpoet – but something that was between the role of MC rapper and singer.” Ghostpoet debuted with a self-produced EP “Sound Of Strangers”, which has been online hit the DJ and producer Gilles Peterson, who immediately involved in Ghostpoet its label. His first album “Peanut Butter Blues & Melancholy Jam” is the confirmation of the talent Ghostpoet and calls it one of the most lively and creative presence of black music today.