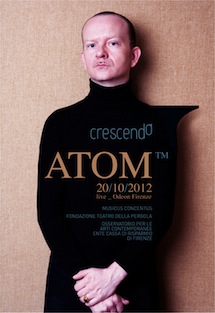 A new appointment in the sign of the new electronic arts for “Crescendo”, the series promoted by Musicus Concentus, Osservatorio Per Le Arti Contemporanee Ente Cassa di Risparmio Di Firenze, Fondazione Teatro Della Pergola. For the first time in Florence a performance by Atom Tm, one of the most beloved and influential artists, for a set of music and video that binds to previous “Crescendo” concerts, such as Matmos, Matthew Herbert, Ryoji Ikeda.

Atom TM is one of the faces behind which Uwe Schmidt, the German composer and performer, among those who founded the new languages of electronic music. Atom TM is one of his many monikers, together with Señor Coconut, Atomu Shinzu, Atom Heart, Flanger, The Disk Orchestra, Los Negritos (to name just a few), indicating a sound world full of inventions and facets, as many as the acronyms used in time.
For “Crescendo” in the prestigious setting of the Odeon Firenze Atom TM will preview his new realization for music and video, “HD”, which comes after the previous chapters called “Liedgut” and “Winterreise”, marked by enveloping atmospheres minimal.

Thanks to Odeon Firenze