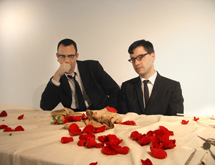 The season of concerts by Tradizione In Movimento of Musicus Concentus opens with a special event: the Matmos at theTeatro della Pergola in Florence.

The Californian duo Matmos is a new standard bearer of musical sensitivity, trait d’union of different experiences, electronic exploration and confrontation with new technologies, the synthesis of sounds associated with classical music and pop. The unique electronic duo made up of MC Schmidt and Drew Daniel, based in San Francisco, played new compositions and videos in Florence, also including music composed recently with Robert Ashley.

In recent years, Matmos, with a series of fine CDs and concerts have shown that music can be produced starting with recordings from the most varied sources: amplifying the nerve tissue of a crustacean, sampling the sounds of sessions of liposuction and cosmetic surgery, using microphones in contact with various parts of the human body, and even resorting to sounds and noises produced by insects, and musical instruments, everyday objects and human voices…