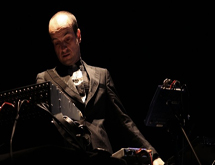 Crescendo is a new project that grew out of the collaboration between Musicus Concentus, Teatro della Pergola and the Osservatorio Per Le Arti Contemporanee Ente Cassa di Risparmio di Firenze.

The stated objective of the project is to present the public with artists and musical experiences related to contemporary forms of expression, difficult to realize because of the complexity and high production costs.

Crescendo was inaugurated in October 2008 at the Teatro della Pergola with an artist whose work reflects the characteristics described above:  Matthew Herbert, musician, composer and producer, is one of the most prominent names on the new music scene, using new theoretical composition techniques involving the sampling and use of pre-existing music or sound, bringing into play the traditional musical idioms of the past, such as the relentless sounds and swing of big band jazz.

The concert by The Matthew Herbert Big Band in Florence coincides with the world wide release of the second recording by the collective, There’s Me And There’s You released under the label !K7 and distributed in Italy by the Florentine Audioglobe. A hugely anticipated work that places Herbert in the company of the great English jazz soloists and inaugurates the collaboration with the vocalist Eska.