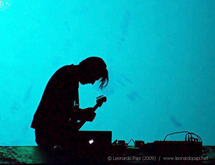 Crescendo proceeds with an important double bill evening dedicated to new electronic music, presenting the Italian premier of the encounter between composer and performer Fennesz and the video artist Lillevän, and the first concert in Italy of Bérangère Maximin.

Originally from the former French colony of Reunion Islands in the Indian Ocean and long a resident of Paris, Bérangère Maximin debuted with the album Tant Que Les Heures Passant produced by John Zorn. His music offers a fascinating and mysterious world, in which his previous experiences as a singer and student of electro-acoustics can be traced.

Christian Fennesz is one of the leading figures in minimal electronic and glitch music.

Fennesz’s music will be tied in with the extraordinary video clips elaborated directly by Lillevän, one of the two members of the famous and disbanded ensemble Rechenzentrum.