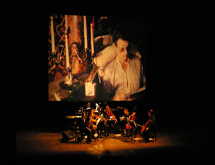 The art of mirrors

For the Concert Series Crescendo, Max Richter offers The Art of Mirrors, a live soundtrack for the super 8 films of Derek Jarman, rarely seen in Italy.

Richter is one of the most exciting and creative contemporary composers and performers. His recent achievements include the soundtrack for Waltz With Bashir, the film that was nominated for an Oscar, while his activities began with the ensemble Piano Circle, which commissioned and recorded compositions by Philip Glass, Steve Reich and Brian Eno. A graduate of Edinburgh University and the Royal Academy of Music, a student in Florence with Luciano Berio, he is often compared to composers such as Arvo Part, John Adams, Michael Nyman, and Philip Glass.

Derek Jarman is considered one of the greatest authors of the British cinema. Known for films such as Jubilee and Caravaggio, Jarman’s medium of choice during the 1970s was the Super 8mm format.