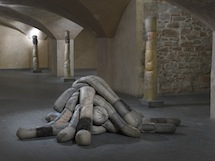 Gavin Kenyon. Lift your head, give me the best side of your face

Until June 10, the Marino Marini Museum in Florence hosts “Lift your head, give me the best side of your face”, the first solo exhibit in Italy by American artist Gavin Kenyon (1980), unanimously recognised as one of the most intriguing figures on the current international art scene. His work centres on sculpture, in abstract works possessing a biomorphic quality. Drawing inspiration from the area he grew up in, the forests of Upstate New York, Kenyon’s bulbous sculptural forms in cement, wool, and other organic materials are rooted in George Bataille’s concept of Informe (1929). Curated by Alberto Salvadori, the exhibit is comprised of 13 new works created by Kenyon specifically for this unprecedented Florentine project, works which will be housed in the Marino Marini Museum crypt. Produced in Italy, the sculptures constitute a key juncture for Kenyon, as formal combinations fusing elements typical of his work, such as the untamed nature of shapes and the inherent anarchy of free matter to discover its own form despite breaking with rules of construction—while considering as well the formal symbolic conventions of Renaissance architecture as represented in the Museum crypt space. Over the past year, inspired by architecture and classical sculpture, Kenyon has been experimenting with new forms, forms that recall arches and columns yet are reinterpreted in line with his trademark biomorphic sensibility. These monumental sculptures, like others he recently created for public spaces in the United States and Italy—from his first museum solo exhibit Reliquary Void at MOMA PS1 in New York to Four Sentinels at Milan’s Corso Indipendenza gardens, both in 2014—alter our perception of space by creating new focal points and perspectives. Kenyon is able to unite the poetic with the grotesque. His works result from the pressure of wet cement in fabric, vinyl, and faux furs moulds, sewn together and painted in the final stages, and which once hardened take on ambiguous features reminiscent of the work of Lynda Benglis or Louise Bourgeois.  Alluding to anatomical shapes with their often human characteristics and organic forms similar to soft tissue, these at once seductive and repelling sculptures appear alive, a result of the constant tension and opposition between representation and abstraction, masculine and feminine.

Special thanks to the Galleria ZERO…in Milan for their collaboration.

This exhibit was made possible thanks to collaboration with the Luigi Pecci Centre for Contemporary Art, as part of the Tuscan regional project “Cantiere Toscana Contemporanea”.