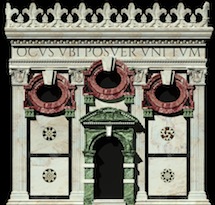 Marino Marini Museum will inaugurate the personal show of artist Pablo Bronstein (1977) on Saturday 12 December with a new site-specific project for the Museum, curated by Alberto Salvadori and Leonardo Bigazzi. The exhibition, entitled Studies in mannerist decomposition, is the artist’s first personal show in an Italian institutional museum. In this project, Pablo Bronstein has focused on one of his favourite themes, as he has for a long time: the re-elaboration of the stylistic and decorative elements of European architecture and theatre from the Renaissance to our time. His studies, formally realised in the form of extremely refined drawings, installations and performances, conceptualize a fascinating and uncontrollable theme, the principles of which are dictated by fantasy and the capacity to elaborate existing data, leading to the definition of a fascinating meta-history of architecture. A new series of drawings and models developed by the artist in dialogue with the Holy Sepulchre monument by Leon Battista Alberti in the Rucellai Chapel will be presented for the exhibition. The Chapel was opened to Museum visitors after restoration in 2013. A masterpiece of the Renaissance, designed to emulate the Holy Sepulchre in Jerusalem, Giovanni di Paolo Rucellai commissioned it from Alberti and construction was completed in 1467. The exhibition includes several themes that are essential to the artist’s approach, in particular the aesthetic and conceptual relations between the model and the objects that derive from his studies. In a flowing series of superimposed styles, citations and comparisons, Bronstein creates an imaginary history of Alberti’s work, ideally following it through the centuries after its construction with possible Mannerist contaminations, and finally arriving at the exuberant decorative and theatrical elements of the baroque. With the auxiliary of highly elaborated 3D printing and rendering, the artist has created scale models – Rucellai Sepulchre with weak Mannerist Amendments I – IV – with the addition of decorative elements such as niches, columns and other openings. One section of the exhibition will be dedicated to the artist’s work in recent years including his video Origin of Sprezzatura (2010), in which he refers to the term coined in the 16th century by Baldassarre Castiglione to indicate the attitude of the courtier, and a selection of his drawings executed between 2007 and 2014, on loan from important private collections in Italy.

The exhibition has been produced with the support of OAC Ente Cassa di Risparmio di Firenze, Galleria Franco Noero (Turin) and Herald St. (London). Thanks also to Golden View Open Bar for its support.