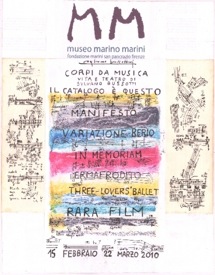 Sylvano Bussotti has always pursued a vast activity in graphic arts, expressed in the staging of complex and sumptuous works. in the scores, true cornerstones in the history of twentieth-century music, images are harboured that become notes and designs that lend themselves to be reinterpreted as a score, a suggestion for future action on-stage.

Corpi da musica. Vita e teatro di Sylvano Bussotti, from 17 february to 22 march 2010 at the Marino Marini Museum, curated by Luca Scarlini, proposes a vast selection of the artist’s graphic works, many of which are here presented for the first time in public. The overview starts in the 1940s, with the first portraits, that capture moments of a nomadic existence, and then passes through projects for shows that were never realized and iconographies of works that have had a vast resonance, in a mix of art and life. A remarkable visual itinerary, that over the years has emerged only in a few occasions, starting with the exhibitions connected with the activities of gruppo 63, under whose aegis the famous debut in Palermo of Bussotti took place in 1965, of La passion selon Sade, a very black mass in the name of the divine marquis, that told of a chamber theatre of eros and dreams.

The halls of the museum will be filled with the sound of the music created and chosen by the maestro himself.