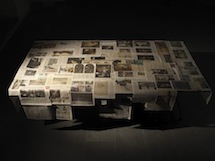 The exhibit of Rob Johannesma (born in Amsterdam in 1970, lives and works in Amsterdam) is organized by the Marino Marini Museum in Florence and ar/ge kunst Galerie Museum in Bolzano. The artist’s first solo show in Italy will take place contemporaneously in both institutions.

In the last few years, Johannesma has focused on an exploration of the symbolic qualities of photographic reproductions. By means of a sophisticated comparative methodology of interpreting the images he attempts to establish a resonant relationship between the icons of the artistic-historic heritage of Western society and the materials offered by the globalized media universe. The textual codes that have been used to construct the visual imagination in the Western world from the Renaissance until now are the object of his research, which aims to investigate the nature of contemporary photographic images and their form of historic evidence.

The photographic images that Johannesma selects within his research, are images that accompany the international daily press, as a resource of direct information of global events. The artist focuses and preserves these images, which by their nature serve as visual materials of hyper-accelerated consumerism, since they are meant for expiration within the span of a few short hours after their creation. This involves predominantly photo-reportage of wars, images of violence and scenes characterized by strong geopolitical content. Johannesma unites in his installations – in semantic terms – the mechanical reproducibility of images with the idealized construction of history through the visual paradigms of the European tradition of painting, which the artist points out within the matrix of Dutch and Flemish Renaissance culture.