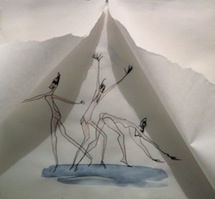 THE DANCE OF THE INGRATES

For FLORENS 2012, the Museo Marino Marini presents, on 7, 8 and 9 November, Il Ballo delle Ingrate (The Dance of the Ingrates) a multimedia show, loosely inspired by the homonymous operina by Claudio Monteverdi, conceived and directed by the Italian artist and performer Letizia Renzini, with musical direction by the Italian-Swiss soprano Sabina Meyer.

Il Ballo delle Ingrate is the natural development and expansion of La Ninfa in lamento, a theatrical music piece in concert form already presented at the Marini by Letizia Renzini and Sabina Meyer, with the musician Diana Fazzini. It takes its inspiration from the sensual world of seventeenth-century musical theatre, departing from it with an interdisciplinary and technological transfiguration (in collaboration with Avuelle) which uses a vocabulary and media that are both analog (body, voice, instruments) and virtual (video, lighting, electronic music). This “site-specific” work takes the themes in the original libretto of the homonymous operina written by Claudio Monteverdi with Ottavio Rinuccini and performed for the first time in Mantua in 1604, and compares and interprets them with an uninhibited and contemporary approach, as well as using the wonderful and sensual world of women’s Renaissance music such as that of Barbara Strozzi or Luzzasco Luzzaschi, or the story of the “Concerto delle donne” or “Consort of Ladies”, a women’s vocal group that revolutionized Italian secular music in the late sixteenth century.

Il Ballo delle Ingrate is also a film made for television in 1976 by Ingmar Bergman, with choreography by Donya Feuer and music by Claudio Monteverdi. A mimed action in the form of a ballet that is based on the expressions and attitudes of the characters more than on the movements of the body. As the author himself said “a drama without words” or a “choreographic composition”.

4 musicians on stage: the classic trio and electro – acoustic framework. In addition to the classic repertoire, there will be compositional sounds of a different type: live mix, ambient compositions and some modern and contemporary recorded segments. The music performed on traditional instruments (viola da gamba, harp) will be caressed by electroacoustic sublimations that give a voice to the subconscious, to the intimate thought that underlies the text.