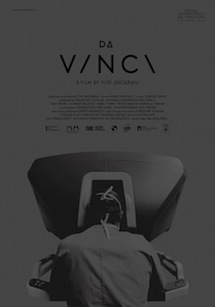 Da Vinci is the title of the final chapter of Yuri Ancarani‘s trilogy, which is centred on the theme of work. Conceived and made as artist documentaries, the first two chapters, as well as being able to boast several important names, such as Maurizio Cattelan as producer, were presented at the 67th and 68th Venice Film Festivals.
Il Capo (first episode, 2010) and Piattaforma Luna (the second episode, 2011) have been shown and continue to be shown in some of the most famous film and documentary Festivals in the world and they are receiving numerous awards, including: nomination for Cinema Eye Honors, (Museum of Moving Image, New York, USA), “Grand Prix in Lab Competititon” Clermont-Ferrand Film Festival (Clermont-Ferrand, Francia); “Honorable Mention”, Dokufest – International Documentary and Short Film Festival (Prizren, Kosovo); “Miglior Documentario”, New Horizons I.F.F. (Wroclaw, Polonia).The three chapters will become a feature film in episodes which will be presented as a special event in 2013.

The film Da Vinci is entirely set inside an operating room, an imaginative journey into a microcosm where the hope and expectation felt from the outside are confused with the clear and rational objectivity of the machine and the surgeons. An unintentional drama is triggered by the working process, with time marked by the waiting, moments of pathos, a sense of routine normality that leads us viewers to be fascinated by such serenity and professionalism in the doctors and operating room staff.

The film has been shown in an International Premiere on November 15, 2012 at the Rome Film Festival, in the new section entitled “Cinema of the twenty-first century”, in collaboration with the MAXXI National Museum of XXI century Art.