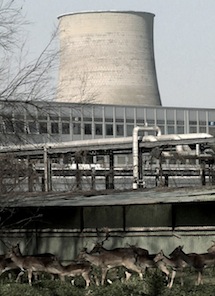 The exhibition Ricordi per moderni – Memories for Moderns, curated by Luigi Fassi and Alberto Salvadori, is a recognition of 10 years of work by the Italian filmmaker and video artist Yuri Ancarani and will present three new videos produced by the Museo Marino Marini for the occasion along with another 11 made between 2000 and 2009.

In Ricordi per moderni (Memories for Moderns), Ancarani’s video research and work are permeated by the fantastic and surreal atmospheres where the industrial areas of the Adriatic Coast co-exist alongside domestic interiors and landscapes that bear witness to hidden scenes of everyday life. The documentary quality immerses the viewer in an atmosphere full of evocative and dreamlike narrative, providing a travelogue experience that takes the viewer on an exploratory journey to an unknown and ambiguous human and geographical landscape. Here an important symbolic relationship between the natural and industrial space emerges, ancestral obsessions and rituals, passages full of erotic and disarming loneliness. In Ancarani’s film work, both the invisible, in the form of desire, in the guise of what we wish were there to reveal what cannot be seen, thus fuelling expectation of the happening, and the uncontrollable nature of the situations, are manifested in an atmosphere pervaded by comforting presences such as those of vacationing and seeking pleasure on the Adriatic Coast.

Ricordi per moderni (Memories for Moderns) unfolds in the vision of 14 videos, two on monitors, and the others projected in three sequences of four on a system with four screens that make up a base surface of 16 linear meters by three meters in height. The three videos produced for the exhibition are based on scripts that the artist had let sit for years, La questione romagnola (The Romagnola question), Parcheggi a pagamento (Pay Parking) and Fuori stagione (Off-season). In addition to these three, there are: Invito al desiderio (Invitation to the desire), Vicino al cuore (Close to the Heart), Baal, Lido Adriano, IP OP, Isole d’acciaio (Islands of Steel), In god we trust, Made in Italy, Rimini, Aranci mantra (Mantra oranges) and Ugarit.

In collaboration with Lo Schermo dell’Arte, at the cinema Odeon, Thursday, Nov. 22, the award-winning film Il Capo (2010) will be presented at the 67th edition of the Venice Film Festival for the Orizzonti (Horizons) section, a surprising short film set in the marble quarries on Monte Bettogli, and Piattaforma Luna (Platform Moon) (2011), filmed in the hyperbaric chambers of a platform for the extraction of gas.

The exhibition was made possible thanks to the support of the Centre for Contemporary Arts Ente Cassa di Firenze, the program of the Region of Tuscany – Toscana Incontemporanea 2012, and Ravenna città Capitale della Cultura 2019.