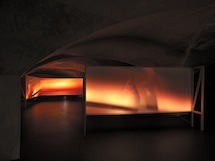 At the Museo Marino Marini Luca Trevisani (Verona, 1979) is presenting a new project entitled Glaucocamaleo. Curated by Alberto Salvadori with Davide Giannella, this is a large, five-screen video installation produced and realized by the Fondazione Marini di Firenze, OAC Ente Cassa di Risparmio di Firenze, Studio Trevisani with Withstandfilms, 999films and Spazio.The project is a work platform that Trevisani set up two years ago, and which has currently been articulated in three different forms: a film, presented at the International Film Festival of Rome in 2013; a forthcoming book, to be published by Humboldt Books; and a large museum video installation. The central element of Glaucocamaleo is the flow of water and transformations in the state of matter, visualized, reproduced and documented in controlled conditions and susceptible to change. Sculpture, as a Promethean metaphor, is moulded and left to live within an environment forged by moving images, growing until it surrenders to the vitality of the matter constituting it. The matter thus yields to its limits and begins to break up, creating an archipelago of forms, a fragile, spectacular and ephemeral ecosystem.

In this whole process humans are seen as being capable of conducting the dynamics of actions, and remain protagonists thanks to their capacity to shape the world, to make nature understandable or to relate to it. Sculpture, on the other hand, is seen as Promethean myth arising from matter and shaped by fire, capable of assuming different forms and of changing continually.