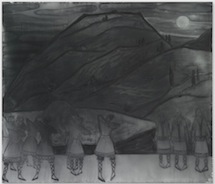 In the paintings of Silke Otto Knapp there is an overlapping of style elements that exemplify her artistic code. Her painting is untranslatable, insofar as it is impossible reproduce, for it contains differences, and  many gestures and countless watercolor washes and glazes, all of which make up the surface of the canvas.
The subjects of the canvases are drawn from reality, from the observation of landscapes, from images printed in books and from the artist’s own vision, which testifies to her interest in the work of writers choreographers and artists. The real dimension of the subject becomes the object of investigation, and this process of construction of the painting imprints a temporal sequence on the works.. This translates into the subtle and infinite tonal variations of a painting style that recalls Morandi, with liquid surfaces that record the passage of pigment applied and removed.
The image we see is a succession of propositions that first allude, then suggest, and ultimately define the real presence of the subject. It is in this process that the interest of Silke Otto Knapp in the work and method of construction used by Gertrude Stein, particularly in Tender Buttons, from which the title of the exhibition, Cold Climate, is taken. The lexical deconstruction, syntax, discursive practice and logical consequentiality redefine every standard of language, to the point of achieving a personal and inimitable visual linguistics, both in Stein and in Otto Knapp.
Standing before her paintings, one can see, read and feel all of this; the closer one gets, the more one concentrates on the painting, the deeper these sensations register. Her paintings trigger a process of viewing and representation that could be compared to a passage from  Tender Buttons : A kind in glass and a cousin, a spectacle and nothing strange a single hurt color and an arrangement in a system to pointing. All this and not ordinary, not unordered in not resembling. The difference is spreading
The polysemy of Stein’s writing runs parallel to the surfaces and chromatic variations in the painting of Silke Otto Knapp, who uses gestures, signs and veils to suggest different experiences. Her painting contains an intrinsic polysemic value, like the language of Tender Buttons, which demands from us a necessary effort of interlocution and interaction, creating a space of action that breaks from the surface, spreading.
In the crypt of the Museo Marino Marini the canvases are presented, both in relation to one another and separately, supported by lightweight mobile structures in metal. They occupy and  define a shifting architectural dimension of the exhibition space, each assuming their own singular identity, causing that intrinsic polysemic quality to emerge.
Within this presentation the paintings  are autonomous objects in space, that form a stage set. The reveal another element of the composition, of the narration: time, the time of viewing, of performative representation, of reading, of intellectual investigation.

The Museo Marino Marini would like to thank the greengrassi gallery in London, Daniel Bucholz (Berlin) and Gavin Brown Enterprises (New York) for their collaboration.