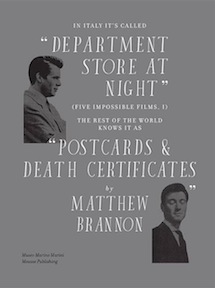 Published by Mousse in coordination with the first solo show by Matthew Brannon at the Marino Marini Museum in Florence the catalogue In Italy It’s Called “Department Store At Night” (Five Impossible Films, I). The Rest Of The World Knows It As “Postcards & Death Certificates” is organized as two independent volumes containing an unpublished novel by the American writer, “Antelope,” an essay by Alan Reid in the form of a set of “imaginary” letters sent to Brannon himself, “Unanswered Letters,” and a critical text by the curator of the exhibition and co-editor of the catalogue Alberto Salvadori.