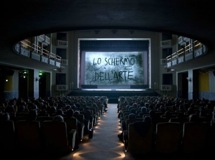 Lo Schermo dell’Arte Film Festival is one of the most important international festivals dedicated exclusively to contemporary visual arts. United within its rich program are documentaries, artists’ films, video-installations andmeetings with their authors, in the following sections: Cinema d’artista, Sguardi (Glimpses), Mobiles and Festival Talks. Among the artists and directors invited, just to name a few: Sarah Morris, Omer Fast and Corinna Belz; among the screenings, it is worthy to list, 1395 Days Without Red by Anri Sala, Over Your Cities Grass Will Grow by Sophie Fiennes about Anselm Kiefer; and Urs Fischer by Iwan Schumacker;  William Kentridgeby Susan Solinas and Charles Atlas and documentaries on stories from present and past, such as The Treasure Cave by Bahman Kiarostami, on the Teheran Museum of Contemporary Art.

With Mobiles, the Festival began a new program of exhibitions in places outside the cinema, in order to present works by major international artists who express themselves with moving images; the first edition was devoted to Talk Show by Omer Fast at Cango-Cantieri Goldonetta. Alterazioni Video was awarded the 2° Lo schermo dell’Arte Prize with the project Sicilian Uunfinished. The transformation of the real.