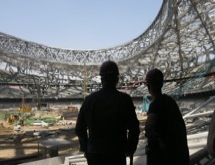 The screen of the arts is an international Film Festival on Visual Contemporary Art, directed by Silvia Lucchesi.

Arising out of a successful section (with the same name) of the Festival dei Popoli, in 2008 The screen of the arts became an independent project and was included in the 50 Days of International Cinema in Florence cycle, organized by the Mediateca Regionale Toscana Film Commission in partnership with the Regione Toscana and Comune di Firenze.

Among the gests and the italian premiere of this edition, the program is made up of Our City Dreams, a film by Chiara Clemente and a journey through the lives and the places of five women: Swoon, Ghada Amer, Kiki Smith, Marina Abramovic, and Nancy Spero; Bird’s Nest: Herzog and De Meuron in China by Christoph Schaub e Michael Schindhelm; Seven Easy Pieces by Marina Abramovic by Babette Mangolte, a vivid portait of Gabriele Basilico produced by Giampiero D’Angeli.