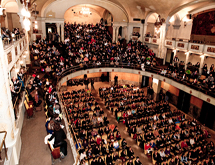 The second edition of The screen of the arts Festival – directed by Silvia Lucchesi – is devoted to artists who deal with cinema as a mean of expression, such as Mark Lewis – who presents his Backstory – and Alfredo Jaar who tributes an homage to Pasolini and through the video The ashes of Pasolini explores his critical and poetic research on the subject of awareness.

The festival is also the stage for some italian premiere: beside Julian Rosefeldt – American Night by Heinz Peter Schwerfel and Picasso & Braque Go to the Movies  by Arne Glimcher – a vivacious fresco of the magical relationship between visual arts and cinema – the program includes the irreverent documentary The Great Contemporary Art Bubble by Ben Lewis and among the video portraits, just to name a few those of Cindy Sherman and Cildo Meireles.