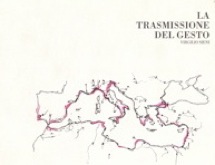 La Trasmissione del gesto (Transmission of the gesture) – a publication edited by Virgilio Sieni and published by Artout&Maschietto Editore – is an iconographic journey through a decade of Virgilio Sieni’s artistic experiences, including works, explorations in progress, and project maps up to 2013.

The book outlines an arc that goes from the experience of artistic residency with the Compagnia Virgilio Sieni to projects developed around CANGO Cantieri Goldonetta in Florence, founded in 2004, the work at the Accademia sull’arte del gesto, founded in 2007, to the early stages of the international project in the four year period of 2010>2013 involving cities and regions around the Mediterranean.

La trasmissione del gesto is part of the series Il Gesto no. 16