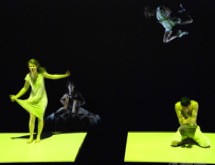 Krypton presence at the Teatro Studio in Scandicci was initially an interpretation of the demands and needs of the city ‘under development’ which Scandicci was at the time: an urban area adjacent to the historic city of Florence, called on to compete with the kind of energies demanded by today’s world, and often circumvented by the city of art due to the inevitable and questionable propensity for conservation. The basic idea of the Krypton/Teatro Studio project has helped to characterize the identity of a new city, ahead of its time and providing a model for many centres of contemporary culture.

To date, this theatre on the outskirts has seized every opportunity to explore the new performing arts, seeking young talent, which has led to the creation of the Zoom exhibition. Krypton’s interdisciplinary and multi-lingual passion could not spend itself in the privileged relationship with the theatrical idioms. Hence the frequent collaborations with some of the greatest interpreters of the culture and idioms of our time.