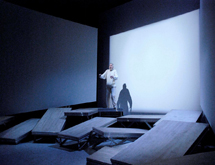 With Antartide o dell’immersione nel bianco (Antarctica or diving in the white) Giancarlo Cauteruccio returns to poetry, choosing the homonymous work by Roberto Mussapi, published by Guanda in 2000.

It is 1901. Western man, who explored and conquered almost all the lands and seas of the world, ventures onto the last unexplored continent, the legendary Antarctic, which has been the subject of fables since the time of the Greeks and which for centuries has been approached by the great navigators. But when man finally reaches it, he realizes that the last continent is just ice and dazzling whiteness. This is the conquest with which our century begins: nothingness. Starting from this assumption Roberto Mussapi has written a poem on the conquest of Antarctica which becomes a metaphor for the human condition and the crisis of the twentieth century. The lone protagonist of the piece is Virginio Gazzolo, whose voice – thanks to innovative technologies – is amplified and expanded on the stage to tell the dramatic journey of the ship Endurance, and images generated by a sophisticated digital-visual system creating the dreamlike visionary landscape.

A blinding white, an icy prison in which the Commander Tom Crean recounts his life and in which he and his crew of men struggle against death.