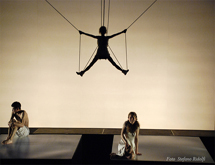 The Compagnia Krypton brings to the stage Il ponte di pietra (The Stone Bridge), a text by Daniel Danis, directed by Giancarlo Cauteruccio.

Two children, Momo the boy and Mung the girl, are the protagonists of this story without time or place. The children tell of their departures from their respective families, who, to get away from a conflict zone, have them delivered to a foreigner in exchange for money, hoping to save them. And it is in this merchant’s truck that the first meeting between Mung and Momo takes place, before they become slaves in a carpet factory.

Both children have a souvenir of their family. Mung brings an animal skin, given to her by her grandmother, on which she must continue to weave the legend of her family, while Momo brings an idea, namely the desire to build bridges as his ancestors before him had done. One day in the factory, there is an explosion and the children manage to escape. Together, between dream and reality, they explore the world, in search of the ‘country without war’. Together, they will learn to know themselves and each other, to fight suffering. Together they will invent a new world.