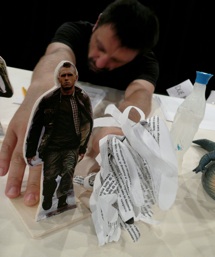 Aufstieg und Fall der Stadt Mahagonny is the masterpiece connecting the theatrical author Bertolt Brecht to the musician Kurt Weil at the end of the twenties. The real grandeur of the piece doesn’t reside just in its ability of anticipating the forthcoming scenarios, of describing the anarchy of Consumerism, the falseness and weakness of capitalism, but in its representation too; a work mixing languages, mother tongues, high and low culture, a kind of musical play that melts music and words, making itself available for a series of virtuosities out of the ordinary.

Kinkaleri’s deal sneaks in the crease of mise-en-scene using the text as narrative trail and as a pretext for a performance taking charge of its existential condition; in A&F the pivotal points of Brecht’s work are undertaken as basic elements then developed in a circular move where the performer and the recorded story merge, embodying the signs of the new work.
The performance, properly a one-man-show, develops on a table’s surface where you go back the way of events of the trap-city, characters are played by some puppets, animated by the performer, a true translation of grotesque.
The apparently recreational form of the performance stimulates a reflection on the contemporary manner and on the unlimited possibilities of representation, then turning the Theatre into a sort of pocket-travelling-theatre without avoiding the entertainment that show itself well-rendered.