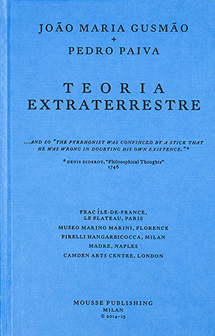 Produced in conclusion to a series of exhibitions—which began in 2011 with “Alien Theory” at frac île-de-france, and le plateau in Paris, by way of Museo Marino Marini in Florence, and ended with “Papagaio”, 2014–15 (premiering at HangarBicocca in Milan then moving on to the Camden Arts Centre in London)—Teoria Extraterrestre is the most complete monograph to date on João Maria Gusmão + Pedro Paiva, condensing nearly four years of work and thought that have been compiled into a film cosmogony by the artists themselves.