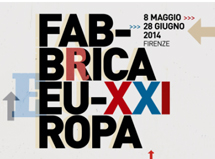 The 21st Fabbrica Europa festival opens up a cross-disciplinary reflection on the “human condition” and on “contemporary memory”, touching on concepts of identity, community and other-ness through artistic creation. An open construction site for a generation on the move, from 8 May through 28 June 2014 the festival offers new perspectives and brings forth a wide range of resistance poetics: performances by international artists that show us the depths of Eastern art theatre and contemporary dance as they are cast onto Europe from various international backgrounds. The festival gives us a look at the world from multiple viewpoints through the eyes of established artists on the contemporary scene and young creators offering fresh new interpretations. A calendar of theatre, dance and performing arts events that starts with the Stazione Leopolda – the location that has symbolized Fabbrica Europa – and spreads to other spaces in Florence, from the Nuovo Teatro dell’Opera to the Teatro Cantiere Florida, crossing the Arno to Cango Cantieri Goldonetta, the Teatro Goldoni, the former Church of San Carlo dei Barnabiti, and finally the Teatro Era in Pontedera.