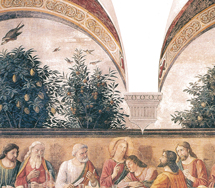 Cenacoli: Depictions of the Last Supper
The event Cenacoli Fiorentini_Grande Adagio Popolare grew out of an idea that Virgilio Sieni developed for the City of Florence in 2011.
Now in its fourth year, the project will take place in Florence’s four Cenacoli, or Refectories featuring a Last Supper: San Salvi, Fuligno, Ognissanti and Sant’Apollonia. These precious spaces, rich with history, where visitors reflect on the meaning of the body and its transfiguration, hold frescoes by such great masters of the Renaissance as Andrea del Sarto, Perugino, Domenico Ghirlandaio and Andrea del Castagno. A series of choreographic works performed by women, men, mothers, children, craftsmen, dancers, workers, philosophers. The project looks at the theme of the body and the origin of the figure in humankind through the story of the Passion as told in the gospels.

The Cenacoli are part of the Museums of the Office for Historic, Artistic and Ethnic-Anthropological Heritage and the City of Florence Museum Network