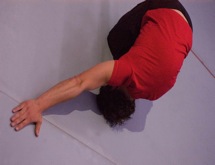 The Compagnia Damasco Corner is made up of a group of blind children and came into being with a project by Virgilio Sieni, with some unique research based on the mutual perception of the body and the nature of the gesture.

L’atlante del bianco gives the stage to Giuseppe Comuniello, the protagonist of a work whose final form was the end of a complex process that began in late 2008 with the support of the team of L’Accademia sull’arte del gesto (the Academy of the Art of Movement). This young blind dancer transcribes for us with his body an imaginary journey towards the knowledge of colours. These are fantasies that originate with simple orientation exercises that develop into an archipelago of outstanding gestures and performances.

L’Accademia sull’arte del gesto, founded and directed by Virgilio Sieni, with headquarters in CANGO, is a study course on the transmission of movement aimed at creating innovative practices on the meaning of the body and dance.

The show is presented at the Festival Oltrarno Atelier