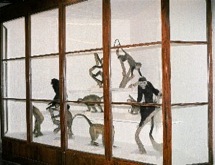 Settecentonovantatre are some of the images Armin Linke has collected over 20 years as a photographer traveling the world for work, producing approximately thirty thousand examples.

His is an archive of the transformations to which man submits the environment in which he settles or just passes through momentarily: the new Asian cities built at the dawn of 2000, the recent settlement in Dubai, from the ranks of people who gather at the river Ganges for the annual sacred ritual the to the photos of the icy uncharted North Pole seen from a helicopter, from portraits to the documentation of musical performances or visual arts.

Within Base, these images will be presented as a picture gallery, a video (Flocking) *, and as a big index covering an entire wall in which the concept of association and narration for images will have the upper hand over the single photo.

Settecentonovantatre is not an exhibit of the archive of photos by the artist, but a way to reflect on the raison d’etre, which also coincides with the use the public makes of them. Settecentonovantatre is a reflection on how they can be interpreted and then presented, how the images can be used and associated among themselves. The material is the same but changing the way it is organized also changes the meaning of the material itself.