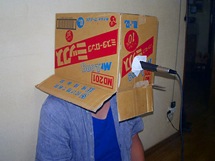 BASE / Progetti per l’arte presented a new project by Davide Bertocchi that the artist describes as follows: ‘The title Divide Bertocchi, instead of David (from ‘divide’ – split) shows that the main intent from the outset for my project for Base is to propose a fragmentation and dispersion in progress (entropy) which is not only physical, of objects, but also existential. I do not want to create a centre, but several independent events: it is as if I pose myself as a fragmented and ramified identity’.

The first work is a video entitled Exhaust (muffler in English but also fatigue, exhaustion…). In particular, this includes a montage of videos downloaded from YouTube; they are all very short home videos made by fanatics of exhaust pipes and mufflers and their sounds. In each sequence you can see and hear only the sound of an engine that roars. In fact they are all muffler tests including a homonymous Japanese brand that is called Bertocchi Mufflers.

This, pseudo biographical aspect, in reality, translates into action that is totally useless and an end in itself. In the other room are various sculptures including The Regime which in French also means diet, in fact the work has a double reference to a form of personal regime but also to the subtle media forms of political regimes. Then there is a chromed stainless steel sculpture entitled Alpha and Omega (chicken-or-egg problem), of the hybrid form of an egg, the quote from the Sacred Conversation by Piero della Francesca, and a stainless steel disc. The features are those of a 33 rpm, which is also a symbol of a now obsolete progress or a flying saucer, or simply tautology on the famous philosophical dilemma: which came first, the chicken or the egg? Another sculpture is a big ball of black ceramic resting on a base, with a surface like an abandoned or burned planet. In reality it is an exact copy of a mirrored disco ball but from which each small mirror has been patiently torn out one by one (of which we still see the traces on the ball) reduced to a helpless sort of skeleton.