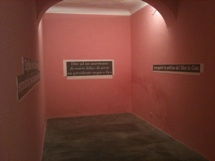 6 proposals (a social sculpture) is an exhibition by Erwin Wurm which reflects on incommunicability in the communication age through a short circuit between statements in conflicting contexts. Our era has been called the era of “liquid modernity” precisely because it is characterized by the great accessibility to all information all over the world, of whatever type and in real time. Potential like this leads the individual to fragment information and make it useless, because taken out of context, it loses its meaning, even to the point of acquiring a strong vein of absurdity. As is often the case in the works of Wurm, in this case too, the project “6 proposals (a social sculpture)” brings a simple observation to extreme consequences, which in this case regards the ease with which it is possible to spread messages to everyone.

The phrases that are inscribed on the walls of BASE/Progetti per l’Arte were chosen by the artist in strong relation to the current Italian political situation. These affirmations are from an archive of 44 texts collected by various people and regard the most common prejudices in our society.

This work was carried out with the German newspaper Die Zeit which, on 27 November 2008, published all the declarations over nine pages by including them in its normal layout.