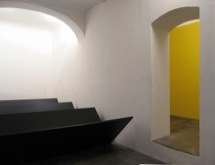 New works, a sculpture, a wall painting and a photograph are the elements which establish an unprecedented relationship within the space of BASE and with which Olivier Mosset reflects on the demands and nature of contemporary places of art. As the artist himself says: ‘ The wall painting is a work that I have presented several times and is always a new experience for me, since it is created in different contexts and environments. To me, painting in general is a sort of illustration or a type of decoration and with my monochrome wall I want to create a more radical type of decoration. The photograph, however, is a silk-screened image of a Harley Davidson motorcycle. Although it is a photograph, for me it is a type of ‘sculpture’ because it comes from a personalization of that object.

The sculpture ZZ  is inspired by the title and form of a Barnet Newman design for a synagogue, presented in 1963 at the Recent American Synagogue Architecture event of the Jewish Museum in New York.

The title Zim Zum, which comes from a Hebrew expression (Tzim Tzum), refers to the idea of reduction and concentration, but Tzum is also the space through which the creative power of God is manifested and brings things into being. My sculpture ZZ, as Vincent Pécoil writes, aspires to a form of transcendence, but installed in the space and located on the ground it suggests a more materialistic ambition. Mine is not an iconoclastic gesture but a form of empathy…’

The project for  grew out of ‘objects that are not’, whether paintings, photographs or sculptures, and in their refusal to talk they do not cease to haunt us with their vivid and real presence. It also opens up a new question about the nature of that particular container that contains them, BASE, and the city in which it is located, in other words, Florence.