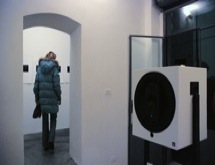 Zone is an exhibit conceived by Carsten Nicolai for the occasion. The title derives from a slang term used by Berlin people to indicate a German from the DDR. Nicolai was born in the est zone. However the Zone is also the site in which every dream comes true, as we can see in the 1979 Andrej Tarkovskij’s film called Stalker.The Russian director lived the last years of his life in Via San Niccolò, in Florence, and the exhibition is conceived as an hypothetical dialogue between the psyco-physical space in which their characters acted, the environment known by the director and the place in which the onlookers could join the experience.

Through a sound installation and other little objects rolled up on mystery, Nicolai will create in the apparently empty space of BASE a new site which spurs the users on investigate their reactions. The aim of the artist is to overcome the split between the different level of perception making the onlookers experiment phenomenons like luminous and sonorous frequencies. The Zone is a mental and physical site, the site of all the wishes but also of the exile, it has no identity but  is able to contain all the identities at the same time. The Zone of Nicolai is a peculiar space in which the witness could join the experience and make his perception change.